Problems with Using Too Much Adhesive

With cyanoacrylate glue (Super Glue), sometimes too much of a good thing is too much.

One quick way to make a rotary die fail is not gluing the rubber down properly, causing the rubber to fly off. We’ve all had this happen at one time. The corrective action often taken to keep it from happening again is to use more glue the next time. As a glue salesman, I applaud that… but as a rubber salesman, I have my concerns.

Different causes can keep the rubber from bonding correctly to the board. Such as the glue may have cured before it touched the board.  Perhaps there was dust or dirt on the board.  Maybe not enough, or even too much accelerator was used.

If you find that a piece is missing from a die, a quick inspection of what’s left on the board will help identify what went wrong.  For example, if half of the original footprint has some rubber stuck the board and the other half shows nothing left, that typically means the adhesive started to cure before it touched the board or the adhesive wasn’t properly spread across the face of the piece before pressing against the board.

If you find that the entire footprint has rubber still stuck the board and it appears the block has ripped off, this can mean there was a problem in the nip… or too much glue used. – More on this later.

Other than PSA, there are typically two types of cyanoacrylate glue used on a rotary die; low viscosity and high viscosity.  The One Step Perma-Bond glue from Essential Products is an example of a low viscosity glue that has a consistency much like water.  This adhesive is perfect for applying blocks efficiently. In one motion, the block is dipped, then slipped across the edge of the pan, and applied to the board.  As soon as it touches the board, it bonds, almost always without an accelerator.  Because of the thin viscosity, very little glue is needed to bond the piece to the board.

What many die makers use, however, is a high viscosity glue that is thicker.  The nice thing with this glue is it gives a couple of seconds to move the piece into place before the glue bonds.  With this glue, an accelerator of some type is needed, whether it be acetone-based or just water.

In situations where the block of rubber has ripped off the board, and the entire footprint has rubber left on the board, take note of where the edge of the block was and notice if there is a sharp edge of glue remaining on the board.

The Problems With Too Much Glue

When using the thicker glue, if the excess isn’t removed before bonding the piece to the board, the extra glue squishes out around the block and works its way up the side of the block like in the picture above.

That glue solidifies on the sides of the block surface, not allowing it to compress all the way, which causes a couple of problems.

We’ve got a couple.

Using a low viscosity adhesive prevents excess glue ooze. Notice the bond surface between the block and board with the low viscosity One Step Perma-Bond. There is no glue ooze present at all. 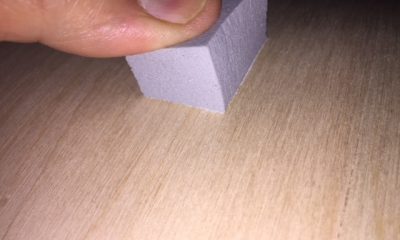 If the higher or thicker viscosity is preferred, then extra care should be taken to scrape off the excess glue on the piece before pressing against the board. Carefully scraping the excess glue reduces the chance of the adhesive creeping up the sides of the block, which not only looks bad but performs poorly as well.

Get Your Free Quote Today! 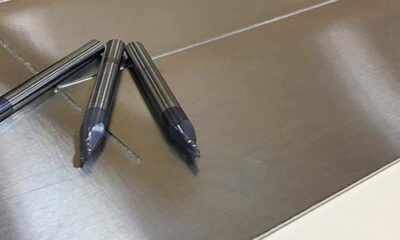 Be the first to know about what's happening with Essential Products!